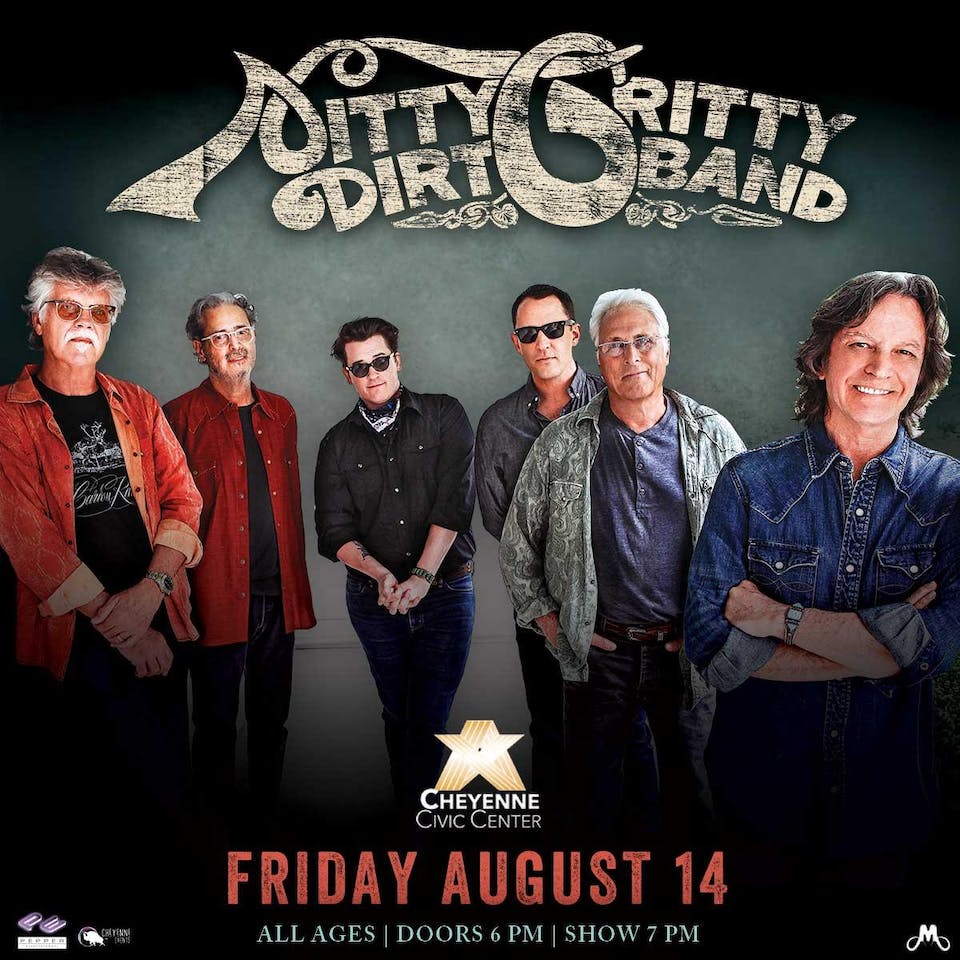 Facebook
Twitter
Email
With a refreshed lineup and newfound energy, The Nitty Gritty Dirt Band remains one of the most accomplished bands in American roots music.

The Nitty Gritty Dirt Band played their first gig in 1966 in Southern California as a jug band and by 1969 had become a cornerstone of the burgeoning country-rock community. Their career breakthrough came in 1970 with the release of the record Uncle Charlie & His Dog Teddy and the single “Mr. Bojangles,” a folksy Top 10 pop hit that remains a staple of their live show. During a tour stop in Nashville around that time, Earl Scruggs and his family came backstage to say hello. That introduction led to a friendship and some of the connections the band needed to record Will the Circle Be Unbroken. That three-disc album brought Nitty Gritty Dirt Band together with a number of country, folk, and bluegrass legends. Heroes like Roy Acuff, Mother Maybelle Carter, Jimmy Martin, Merle Travis, and Doc Watson joined the scruffy, young band to record country music standards such as “I Saw the Light” and “Keep on the Sunnyside.” The acclaimed project is considered a landmark recording in American music.

Nitty Gritty Dirt Band earned a pop resurgence in 1980 with “An American Dream” and “Make a Little Magic.” Those singles also found traction on the country chart, setting the stage for a major run at country radio. The band secured 16 Top 10 country hits between 1983 and 1990, including three No. 1 singles: “Long Hard Road (The Sharecropper’s Dream),” “Modern Day Romance,” and “Fishin’ in the Dark.” Bernie Leadon, a founding member of The Eagles, played in the band from 1986 to 1988 filling a vacancy by longtime member John McEuen.

Today, the Nitty Gritty Dirt Band consists of Jeff Hanna, Jimmie Fadden, Bob Carpenter, for years known as “the new guy,” and Jim Photoglo, a friend of the band whose credits include co- writing “Fishin’ in the Dark”, as well as touring and recording with Carole King, Dan Fogelberg, and Vince Gill. Newest members Jaime Hanna and Ross Holmes also bring years of experience to the band. Hanna toured and recorded with The Mavericks and Gary Allan, while Holmes toured and recorded with Mumford & Sons and Bruce Hornsby.

“The energy these days is so up -- and our fans have responded in a really great way,” Hanna says. “As a fan of other bands, I know how complicated it can be when members come and go. You can either embrace that or you don’t. Our fans are really gracious and I appreciate that. It’s been a really good run and there’s a lot of daylight ahead of us.”